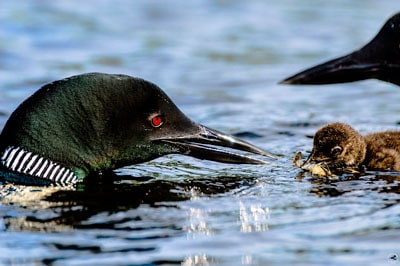 Yes, I am a Common Loon fanatic. It's a bit of an incurable condition, as anyone who spends a summer on a northern lake or pond will know. There is something about seeing these graceful birds cruising about their watery world and hearing that wail echo across the waters on a still night. With the recent release of my book Gavia - Tales From Loon Country this seems like a good opportunity to answer a question I get asked a lot....How do you get your Common Loon photographs?

The answer, or answers, to that question are not complicated or numerous. But they will result in a bit of work on your part.

I'm certain you can guess at the first point.....get out on the water. Either a kayak or a canoe offer an ideal way to approach and photograph Common Loons. A fairly wide, stable boat of either type will allow you to approach quietly and with a minimum of disturbance of your subject. Personally I prefer kayaks. Due to their design they get you closer to the surface of the water and are generally easier to maneuver than a canoe. Kayaks also offer a way to quickly get camera under cover in the event of sudden wet weather. I keep my lens and camera in a good quality dry bag placed between my legs under the deck of the kayak. 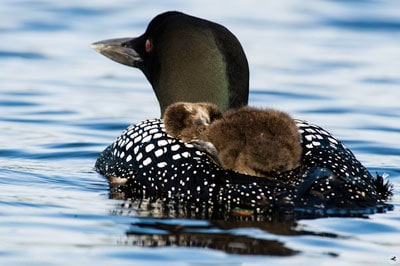 When selecting a kayak, I recommend one with a wide enough cockpit that allows you to get in and out easily and leaves ample room to maneuver your camera gear. Nothing is more frustrating than missing a shot because you are struggling to get your camera up to your eye. On the subject of camera straps, I do not use one because they can get hung up on things in the cockpit. If you choose to use one select a camera strap that allows you freedom of movement and can be slid over your head quickly should you need to get your gear under cover. A good kayak to consider is the Necky Rip. The 12-foot version of this boat offers a good sized cockpit, comfortable seat that can be adjusted several ways and a drop-down skeg that helps the kayak to track in a straight line. The Rip also features a rear storage area and at 49-pounds is not overly heavy or cumbersome to move. But don't take my recommendation as gospel. I definitely suggest you find a kayak dealer and try several models from various manufacturers to find one that works for you.

One of the advantages of shooting a from a kayak is a way to stabilize the camera using the paddle as a support. Simply place the shaft across the cockpit in front of you and rest your elbows on the shaft. It's not quite as stable as a tripod but it can help keep the camera still. It also helps to keep the camera in line with the boat length-wise or at least keep the center of your lens over the center of the cockpit. regardless of which way you are pointing the camera.

Okay..so now on to the really important question. How to find and photograph Common Loons?

Let's assume that you've already found a lake or pond with one or more pairs of loons attracted by an abundant food source and availability of nesting sites. So how do you get close enough to get photographs where the bird appears as something larger than a dark speck on the surface of the water? This is where your powers of observation come into play. Common Loons are territorial and often by nature creatures of habit. If the lake you are photographing on has more than one pair of loons it is helpful to identify the borders of each mated pair's territory. This can help you get into position to photograph the males as they patrol their turf, an event which occurs daily. Outside of the nesting season both loons can be seen swimming together in the early morning. In the best of conditions try and position yourself upwind (this avoids you having to focus on paddling and allows you to concentrate on capturing images) with the sun behind you. But don't overlook the joys of side-lighting or back-lighting as the birds make their way across the water. 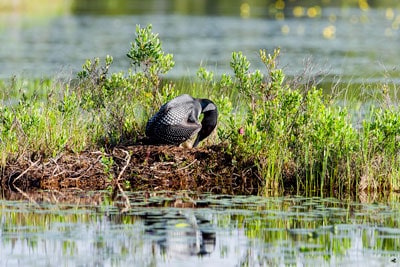 Yes, I said earlier that Common Loons are often creatures of habit. And at times social ones. When observing the birds you hope to photograph watch for times early in the morning or late afternoon when they gather with other loons for a little friendly interaction with their neighbors. Sometimes this behavior may include loons that have flown in from other lakes or ponds nearby. These meet-ups involve behaviors such as bill dipping in what may be a form of greeting, the birds hunting and feeding together and group preening sessions. During one summer on the lake I live on in western Maine these group meetings would take place almost like clockwork between 7:30 a.m. and 8 a.m. every morning, usually in the same general area on the lake. Sometimes the loons would gather for only a short time, at other times their interactions would last for five to ten minutes. However long or short the meeting the opportunity for some interesting photographs almost always presented itself.

The next big question I get asked is how to get shots of Common Loons that are nesting or raising their young. And the answer is always the same...carefully.

I say carefully because Common Loons are VERY sensitive to nest disturbance. It helps a great deal to evaluate each pair of loons on an individual basis and determine how comfortable they are with your presence. On one of the lakes where I frequently photograph loons there are usually two mated pairs. Each year I am reasonably certain one pair in a certain territory will be accepting of my presence; the other will not allow me anywhere near them. I have no idea why. And to pursue the pair that are not comfortable with my being there is pointless and only serves to stress the birds. If the loons you are trying to photograph make repeated "escape dives" that take them some distance away from you or give repeated "tremolo" alarm calls, you are being sent a message. And I bet you can guess what it is.

Back to the subject of getting photographs of nesting loons or loons with chicks. Here are some REALLY GOOD rules of thumb to follow:

Ok..on to getting photographs of loons with chicks. 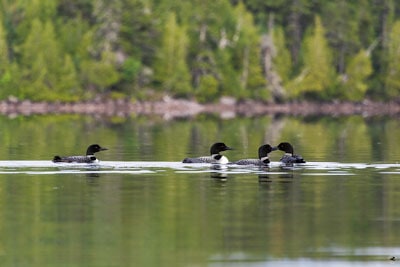 Again, it's always best to judge the comfort level of the adults. When the chicks are young Common Loons will select a "nursery cove" where they will raise their young until they reach a certain age. It's always a good, no, better than good idea to avoid placing yourself between the adult loons and the chick. This will only upset the adults. If you should end up there by accident move away slowly.

Adult Common Loons spend a great deal of time hunting to feed their young. This leads to great photo opportunities as the adults bring food, mostly small minnows, to the chicks. Loon chicks will back-ride on the adults to rest, to stay warm and for protection. This also makes for interesting photographs, especially if the mated pair have twins. Often the adults will both leave the chick on the surface as they hunt for food. At eight weeks of age and beyond loon chicks are capable of fending for themselves, but will stay with their parents until the adults leave for the ocean in the fall.

< Back to the blog